It’s Wednesday. Our trip’s halfway over.

Yet the only real exploration we’ve done in New Zealand’s wilderness is our journey to the Hole in the Rock. That included a boat—and, with it, relative safety.

How silly! I mean, neither of us are the “safe” type. Or we weren’t. I think, when we met, Saturn’s moons whammed into one another, destroying their greatest mountains.

So we start our much-needed, perilous journey by heading into Whangarei Falls. It’s a short walk off a side road.

There’s a bridge that crosses above the falls, giving a beautiful, panoramic view. Heading down the beaten path—all stones and gnarled vines—we then get up close and personal with the misty torrents. I am blinded by water and a force, a thing people like to call God.

A baby duckling swims by in the basin at the fall’s feet. Brooks run through a forest of evergreen. There are birds singing everywhere, but it’s difficult to spot most of them.

We do the typical tourism move of standing in front of the falls and snap-shotting. I’m bad at posing. I’m looking everywhere.

There are rainbows, broken, up and around me.

Then we find a rock with a memorial, a person who died.
We spin stories of how it happened:
Did they walk along the rocks at the waterfall ledge?
Did they jump into the basin and crack open their head?
Did they try to find out if something lurked behind the gushing currents?

I start to leap on a rock, but my ex is horrified that our conversation led to this. He stops me. He’s in shambles. He is such an older brother.

We head to Abbey Caves next, where I may more appropriately try to collapse on moss and rock. I keep the plan quiet this time.

(As a little background, Abbey Caves is a location known for its unattended glow worms. There are other glow worm caves in Northland, New Zealand, with tour guides to walk you safely through. We chose to go into a cave by ourselves, equipped with a grocery-bought flashlight, because it’s cheaper, and we were stupid. This risk isn’t necessarily required, if you’re reading this blog for travel purposes.)

The trek to Abbey Caves is significantly longer than Whangarei Falls. There are wooden steps that climb over cattle fences, and several signs with yellow-painted, “CAVES.” I read them aloud: “Caaaves.”
“Caaaves,” he says.
This is seriously how we’re communicating.

Arrows lead us down a beaten path in a grassy hillside. The horizon is littered with boulders and tiny stones. We climb a few.

It’s hot, but I wore a woolen trench coat in anticipation for the rain. It’s an expensive coat, so I refuse to leave it by the roadside. This is a minimal problem until we reach the mouth of the caves, where backpackers are already evaluating the situation.

The couple ahead of us is fit, well-equipped. Their sinewy bodies have seen dirt paths and caverns many times. But they turn around, smiling at us, and head on their way. They’re not going in. I think, Oh crap.

My ex rushes the mouth of the cave. The rocks that block the passage are as large as me. There are vague footholds on closer inspection, from experienced climbers that’ve done this before.

“Let’s do this,” he says, and he’s getting swallowed by the pitch blackness.

I don’t know what just transformed him from White Knight to Daredevil—
Eh.

I have no arm strength, and the rest of my musculature is, quite seriously, nonexistent—this is the weakest I’ve ever been, and I’m just now, in terror, realizing it—yet somehow, I scale into this cave. And I’m heaving. I cover my mouth with my hands to hide it.

My jacket’s catching any snag it can find. I’m using my knees as a substitute for my hands. I’m bloodied. My ex can’t see my scrapes in the dark.

Inside, the soil is wet. A stream runs through the musky hall. I point the flashlight different directions. The ceiling is rough, the walls are jagged. The watery floor looks fairly deep.

My ex is wearing some expensive shoes—easily compares to the trench coat—so I decide to walk in the water first, to see if this is doable or not. My foot immediately sinks to my ankle. The first step, and my shoe’s water clogged.

I mean, I went through hell to get into this place. Nothing’s scarier than doing something beyond your physical capacity. Doesn’t he realize this? Or is it, because he has superhuman strength, that he doesn’t see the worst part is over?

I roll my pants up and walk further. It’s nearly waist deep by the time we find the glow worms. Two other hikers, both men, approach us in the water. Judging from their accent, they’re Russian.

“Make noise,” they tell us, then they head out, scaling the cave entrance that plagued me just minutes before.

I’m so not made for this. I start laughing. It’s insane laughter.

And my ex, still not moving, click-clicks his camera. He’s done trying to convince me that water-wading is stupid. So I head a little further, until I find a dirt mound that raises above the water level. And I climb atop, to dryness, to freedom. Then I clap my hands and shout into the tunnels. It echoes forever, just like the movies.

When the glow worms startle up to the sound of my voice, it looks as if though a sea of constellations has enveloped the underground. Blue, yellow, and white pin-pricks illuminate the ceiling and the walls. 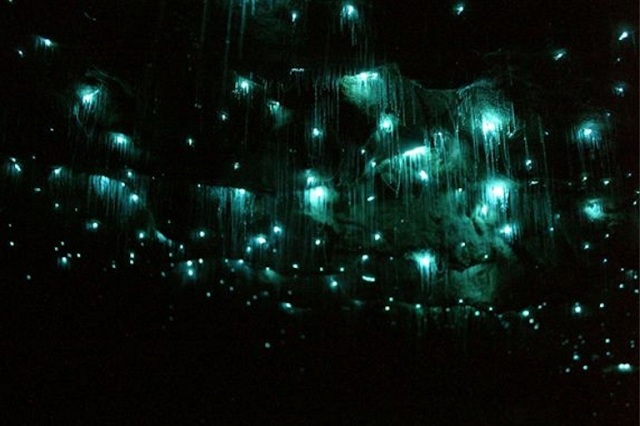 If you could suspend yourself in the universe, this is exactly how it would feel: it’d smell wet, it’d be cold, and your legs would tremble from exhaustion.

But you’d be surrounded by nothing but stars.

We try to take pictures, even though our cameras can’t capture what we see. When we finally head out, I feel like our vacation is complete.